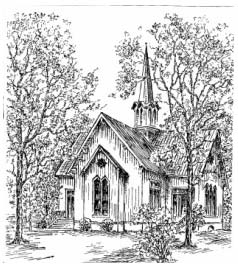 A small group of Swedenborgians, connected by family and business ties, found themselves living close enough together that, on Christmas day in 1860, they formed a congregation– the Parish of the New Jerusalem Church–in Glendale, Ohio. The patriarch, Charles H. Allen (1820-1889), was a wealthy chemist, that is, a wholesale drug supplier, in Cincinnati. He and his adult sons and their families were the core of the congregation.

This Christian denomination is distinguished by its adherence to the interpretation of the Bible by Emanuel Swedenborg (1688-1772) who wrote books he said were revealed to him by God. The Glendale New Church was founded after Swedenborg’s death by people who wanted to mold their lives according to this religion, which emphasizes individual responsibility for salvation by the combination of good works and faith. Swedenborg wrote about the spiritual meaning of the Bible, details about the life after death, the eternity of marriage, and the accomplishment of the second coming among many other religious subjects. While Swedenborg is considered the father of the modern new age movement, he is very much a proponent of salvation through a belief in Jesus Christ as the Son of God. He says that it is the goodness of a person that determines whether a person is saved. One’s faith is a product of inner goodness, not the other way around.

By the early 1800’s, enough Swedenborgians lived in Cincinnati that they had formed the First New Jerusalem Church, and called a pastor. In 1855 a new passenger railroad and the excellent Glendale community, made it possible for wealthy business owners such as Allen to live in the country and commute to work. They of course established churches for themselves and their families near their homes. The small band in Glendale, led by Charles Allen and his family, was one of these, and was a daughter church to the much larger church in Cincinnati.

On March 10, 1861, Mr. Allen chaired a meeting of the congregation’s Council that included himself, George F. Foote and Jacob Purinton. A motion to accept a donation of land from Allen was passed. He then proposed “a further donation to the Parish a sum of money sufficient to build the proposed Temple, so far as to enclose the same, and secure it from damage with paint.” This motion also passed! Three days later, the Council met at the site where they “fixed the south east corner” of the building. One month later, on April 12, 1861, the Council met with a well regarded, and later famous, architect, Mr.Alfred B. Mullett and it approved his plan. By modern standards this project was moving very quickly. One wonders how detailed the sketches were. A visit to the attic will delight any engineer with its complicated, yet marvelous structure that supports the ceiling of the sanctuary, the steep roof and the steeple!

The project’s pace did not slow down. Sixteen days later, the official records note, the foundation was finished with the laying of the cornerstone, the top stone on the southeast corner. This stone is larger than the rest and is hollowed out to allow a box of mementos. This box was opened in 1961, but, alas, it had not been air tight, and the documents inside were dust. A new, air tight, container was put in the stone. Perhaps some of us will be here in 2061 when it can be opened!